“Eleventh minute of the eleventh hour of this eleventh day of the eleventh month…” In wine world that can be only one thing: official start of St. Martin festival.  St Martin in Croatia is mainly celebrated and almost always followed by medias in continental Croatia, where this tradition is little bit more entrenched than in other regions of this very diverse wine country. However, this time from not so much continental Croatia, or more precisely one island known as Korcula have very sound reason to celebrate St. Martin at least as loudly. Harvest season 2011. shows excellent first results, and now we know it officially from the winemakers and several other people who had occasion to bring first samples of Grk and Plavac Mali on local gathering in Lumbarda and where they exchanged first impressions . Speaking about impressions they go as follows: young Grk wine and Plavac Mali are already in this early phase very aromatic, showing nice character, colors and balance that can go so far to predict one of the best harvests in recent history. Cause of all this was pretty dry Summer, 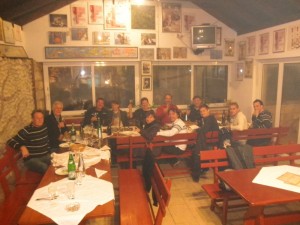 with no temperature imbalances, good harvest timing, grapes always picked by hand, and modest yield of 1 to 1,5kg per vine which is regularly followed by exceptional juice and high quality raw material for further vinification.
Since one picture says more than a thousand words, all can be seen from the expressions on faces from the main wine people from Lumbarda and alcohol blurred vision of the photographer. From left to right: Bartul Zure, Branimir Cebalo, Stjepan i Dinka Cebalo, Maja Cebalo, Višnja i Frano Bire, Perica Žuvela (enologist), Renci Milina, Đani Batistić, Zoran Cebalo and Ivan Zure.
click on photo to enlarge