Famous wine of Lumbarda and one of the synonyms of this 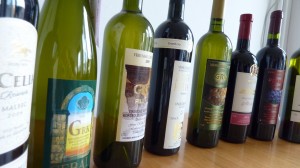 beautiful Dalmatian village! There is probably no wine lover or connoisseur  in Croatia yet who doesn’t know where this unique white wine comes from and where it is cultivated the most.  However it is also interesting to know that among all the wine specialists, there is still no sound agreement whether this particular three vowel name comes from this wine’s taste, the origins of the first  grapes brought to Lumbarda, or eventually from both of those elements that tell us already much about Grk wine itself. Grk as bitter, and Grk as Greek(s) who were the first known to produce wine on this part of Korcula island. Therefore, having in mind that tradition of wine making in this region started with Greek colonies few centuries BC and that inhabitants of Lumbarda from the early beginning, as Croats in general, also have very long tradition in wine making  it would than be a huge mistake  to place Croatia on the map of the “New World” wine countries. Long tradition was however put in danger at the beginning of 20th century and production was  seriously affected, like in the most part of Europe, by the attack of little pest known as phylloxera. Luckily for one part of Lumbarda’s vineyards, phylloxera proved to be less harmful and this mainly goes for the grapes planted in sandy soil  in central part of the village.  However some of the vineyards on southern slopes of Korcula island, with almost perfect condition for wine making, perished the most and were abandoned for decades.  Today the situation is changing in a good sense and the very suitable land for the wine making that was forgotten for more than a half of a century, is getting in focus again.  Southern slopes of Korcula island will very probably give again what Grk likes the most: excellent soil, a lot of sun and temperature stability under the influence of the nearby sea.

Grk wine, that we know today comes mainly from central valley of Lumbarda village, extended on 40 Ha of  red and sandy soil, elevated on max 20m above sea level & surrounded by that same sea from north and south. This Lumbarda’s “white” has clear golden color, distinctive taste and texture, it is dry by it’s character with percentage of alcohol usually lower than 14. Wine lowers would describe it’s taste by accentuating it’s firm acidity with gently aromatic flavor  carrying some hints of pine and saltiness and finish with a little touch of bitterness. Those would be the aromas and sensations of Lumbarda village and that is what undoubtedly suits the best with local gastronomy: sea food, fish, vegetables, but also risottos and cold hors d’oeuvres.

Grk as a grape variety, according to it’s DNA structure shows it’s close relationship to Crljenak Kastelanski (Zinfandel, Primitivo).  However it is not yet clear which one is a predecessor of another.