One of the main Croatian wine and gastro events of the year, organized for 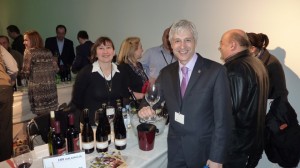 it’s fourth time in Croatian capital of Zagreb, gathered this year a respectable number of wine producers from Croatia and abroad with a total of 600 different wines. Lumbarda and it’s recent vintages were presented by Milina Franko Bire whose Grk and Plavac Mali attract a lot of interest in past few years thanks to important achievements in quality which is than followed by consistency. Many excellent Croatian wines were in focus during this show and Franko’s Grk was according to public opinion and many positive critics arround it’s stand, undoubtedly one of them. Franko and his wife Višnja were as usually great ambassadors of Lumbarda and it’s wines. Cliff Rames, who may be regarded as wine ambassador on a bit broader scene (due to his task of presenting Croatian wines on demanding US market) was once again pretty much attracted by Grk and it’s partner Plavac Mali, two indigenous Croatian grapes who live inseparably in the village of Lumbarda. Finally just for the record, Franko’s Grk  saw this year it’s first public appearance in a Burgundy style bottle.